Thanks for stopping in!  Please take a few minutes and check out our photos, informative newsletters & of course our Ole & Lena jokes!

Read more about us here...

Glad to be a Norwegian

“I’m Glad to be a NORWEGIAN”
When you mention nationality and think of “what you are”
It often brings up references to foreign lands afar
Of course, we know “American” is our nationality
But all of us have ethnic roots that denote our family tree.
For my part, I claim Norwegian as my ancestral tie
And I believe that Viking look still lingers in my eye
A thousand years ago, they say, the Vikings ruled the seas
And conquered many kingdoms
in long boats made from trees.
Leif Ericson went sailing with Vikings ships and crew
And they discovered Vinland around one thousand two
The land’s now called America…history tells us that,
Discovered by a Norseman back when the world was “flat.”
Rocky Norway’s climate and meager farming land
Made our ancestors emigrate, as we can understand
And so here in America we have so many “sons”
Like Olson, Nelson, Hanson, and Johnsons by the tons.
We have Gunsmoke’s own Matt Dillon,
who’s a Norwegian boy;
Knute Rockne and Sonja Henie
were America’s pride and joy.
Many thousand others have brought their Nordic skill
And made us proud of heritage that lingers with us still.
It’s OK to be German, or Pole or Dane or Swede
And even being English would make me proud indeed
But somehow there’s a special feeling
that fills me deep inside
And that is being NORWEGIAN,
for it is my ethnic pride.
So all you sons of Norway, and all you daughters too
Remember Norwegian heritage and what it means to you.
With Lutefisk and lefse and other Norsky food
We keep that special feeling, that real Norwegian mood.
I’m glad to be Norwegian and all that it implies
Of honest working people with good, strong family ties
We love our land, America, in everything we do
And glad are we to say, that we do love Norway too.
© 1979 Norse Press, Sioux Falls, SD. Used by permission. 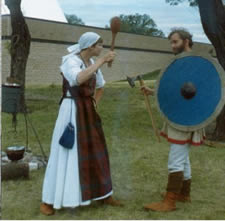 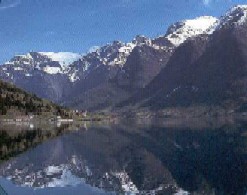 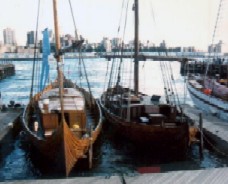 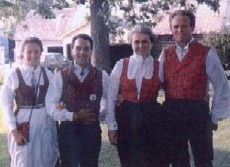